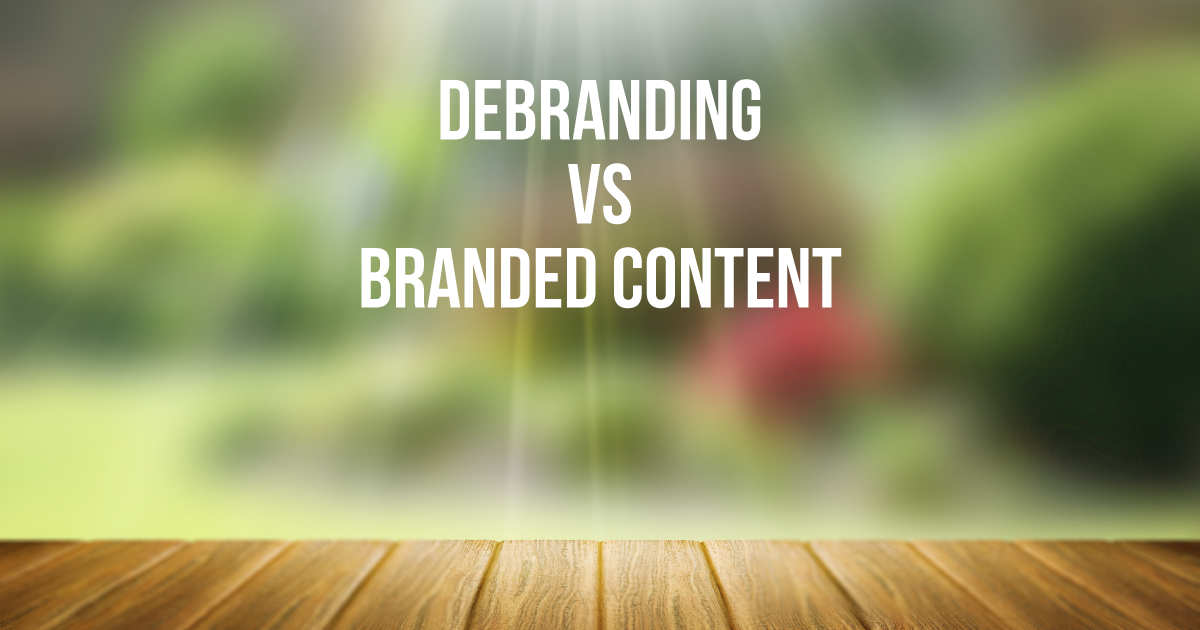 Today we all know what Branded Content is. It consists of generating contents that are identified directly with the brand and, with them, consumers associate attributes and values to it. But every time young people are less inclined to consume advertising and the rest of the public is increasingly disenchanted with the current model, and block it, so brands are looking for new ways to connect with the public and branded content is an essential part Of the content marketing strategy of the companies.

However, a new marketing trend has recently emerged, which turns out to be just the opposite, known as debranding. It consists of removing the brand of the products or services and placing the consumer in the centre, ie, it is no longer the brand that tells the story, but the public.

This strategy can only be implemented by those brands that have a very powerful product, quality and well known, with a highly consolidated visual identity to avoid subtracting notoriety.

Keep in mind that there are certain differences. Branded Content places the brand in the epicenter, it is who tells the story, while the center and the voice of debranding are consumers. With a Branded Content strategy, you create your own content, content that appeals to emotions, experiences or memories through, for example, storytelling in order to establish a direct link with each consumer. Debranding allows consumers to guide and communicate what they feel about the brand. And their goal is none other than to make them feel satisfied to be part of it by taking advantage of one of the greatest participation tools of all time: social networks. There are many things, let’s recap:

Below you can see how the following major international brands have been deployed:

A clear example of debranding was Coca-Cola’s strategy in 2013. They replaced its packaging logo with the names of consumers. In this way, consumers expressed their experiences in social networks and felt protagonists of their history. The objective was to extend the concept of sharing, reinforcing connections… They managed to position them at the centre of the strategy, and that they were the ones guiding the campaign. However, Coca-Cola did not lose its identity through the use of corporate colours and his characteristic script. This was a very viral campaign of Coca-Cola.

Although different, it is a process of debranding in the same way. Consists of eliminating elements of the logo to make it increasingly simple and basic, recognisable by the least elements.

It is a trend that is on the rise and almost all brands end up simplifying their logos, an example would be Mastercard or Shell:

In 2011, Starbucks also removed its name from the logo and left only the image of the siren. It also left space to be able to personalise and write the customer name of each order in the glasses. In this way, each customer becomes the centre and the protagonist, not the brand.

They did exactly the same thing as Coca-Cola. With the difference that each one could send to Nutella the name that wanted to put in his boat. In addition to the names could also choose from 5 labels to do dedications: love, star, us, mom and dad. To get the sticker you had to enter the web of Nutella and click on “Create label”.

And they have done the same with other more recent campaigns like the one of Mr Wonderful or with pieces of songs of Alejandro Sanz:

On the other hand, something very common that do many other brands like Apple are small debranding actions. Without realizing it, they refrain from saying their corporate name at the end of the advertising spot.

Some predict that debranding will be the future of brands. The trend indicates that there is not so much time for us to consume less quantity of products or services, but of higher quality. So brands look for new ways to be attractive and act accordingly, leaving aside the branding. Because if a brand is shown in an obvious way, as it is, it does not have as much travel as when its audiences are talking about it.

Thus, putting aside brands and focusing on product quality and customer experience are becoming the premises of companies. An example of this is the incipient arrival of bulk stores, which are already expanding throughout Europe.

Tags: #digital marketing
By continuing to browse the site you are agreeing to our use of cookies.